Denial-of-Service (DoS) is an attack on a computer or network that prevents legitimate use of its resources. In a DoS attack, attackers flood a victim’s system with illegitimate service requests or traffic to overload its resources and prevent it from performing intended tasks.

The objective of this lab is to help students learn to perform DoS attacks and to test networks for DoS flaws. In this lab, you will: 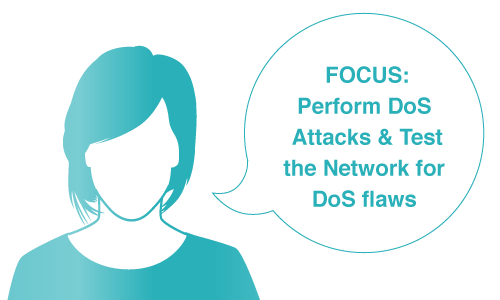 In computing, a Denial-of-Service attack (DoS attack) is an attempt to make a machine or network resource unavailable to its intended users. Although the means to carry out, motives for, and targets of a DoS attack may vary, it generally consists of the efforts of one or more people to temporarily or indefinitely interrupt or suspend services of a host connected to the Internet.

Perpetrators of DoS attacks typically target sites or services hosted on high-profile web servers such as banks, credit card payment gateways, and even root nameservers. The term is generally used relating to computer networks, but is not limited to this field; for example, it is also used in reference to CPU resource management.

One common method of attack involves saturating the target machine with external communications requests, such that it cannot respond to legitimate traffic, or responds so slowly as to be rendered essentially unavailable. Such attacks usually lead to a server overload. Denial-of-Service attacks can essentially disable your computer or your network. DoS attacks can be lucrative for criminals; recent attacks have shown that DoS attacks often allow cyber criminals to profit.

As an expert ethical hacker or security administrator of an organization, you should have a good understanding of how Denial-of-Service and distributed Denial-of-Service attacks are carried out, how to detect and neutralize attack handlers, and to mitigate such attacks.