A wireless network refers to any type of computer network that is wireless and is commonly associated with a telecommunications network whose interconnections between nodes are implemented without the use of wires. Wireless telecommunications networks are generally implemented with some type of remote information transmission system that uses electromagnetic waves such as radio waves for the carrier. The implementation usually takes place at the physical level or layer of the network.

The objective of this lab is to protect the wireless network from attackers. In this lab, you will learn how to: 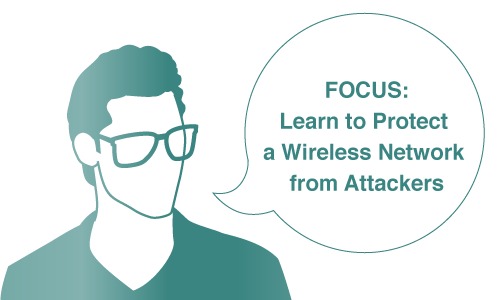 Wireless network technology is becoming increasingly popular but at the same time, it has many security issues. A wireless local area network (WLAN) allows workers to access digital resources without being tethered to their desks. However, the convenience of WLANs also introduces security concerns that do not exist in a wired world. Connecting to a network no longer requires an Ethernet cable. Instead, data packets are airborne and available to anyone with the ability to intercept and decode them. Several reports have explained weaknesses in the Wired Equivalent Privacy (WEP) algorithm by 802.11x standard to encrypt wireless data.

To be an expert ethical hacker and penetration tester, you must have a good understanding of wireless concepts, wireless encryption, and their related threats. As a security administrator of your company, you must protect the wireless network from hacking.