Sniffing is performed to collect basic information from the target and its network. It helps to find vulnerabilities and select exploits for attack. It determines network information, system information, and organizational information.

The objective of this lab is to familiarize students with how to sniff a network and analyze packets for any attacks on the network. The primary objectives of this lab are to: 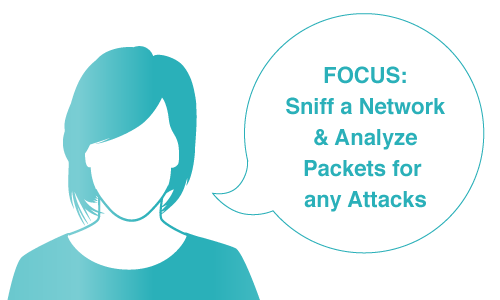 Sniffing is a technique used to intercept data in information security, where many of the tools that are used to secure the network can also be used by attackers to exploit and compromise the same network. The core objective of sniffing is tosteal data, such as sensitive information, email text, etc.

Network sniffing involves intercepting network traffic between two target network nodes and capturing network packets exchanged between nodes. A packet sniffer is also referred to as a network monitor that is used legitimately by a network administrator to monitor the network for vulnerabilities by capturing the network traffic and should there be any issues, proceeds to troubleshoot the same.

Similarly, sniffing tools can be used by attackers in promiscuous mode to capture and analyze all the network traffic. Once attackers have captured the network traffic they can analyze the packets and view the user name and passwordinformation in a given network as this information is transmitted in a cleartext format. An attacker can easily intrude into a network using this login information and compromise other systems on the network.

Hence, it is very crucial for a network administrator to be familiar with network traffic analyzers and he or she should be able to maintain and monitor a network to detect rogue packet sniffers, MAC attacks, DHCP attacks, ARP poisoning, spoofing, or DNS poisoning, and know the types of information that can be detected from the captured data and use the information to keep the network running smoothly.