A virus is a self-replicating program that produces its own code by attaching copies of it onto other executable codes. Some viruses affect computers as soon as their codes are executed; others lie dormant until a predetermined logical circumstance is met.

The objective of this lab is to allow students to learn how to create viruses and worms. In this lab, you will learn how to: 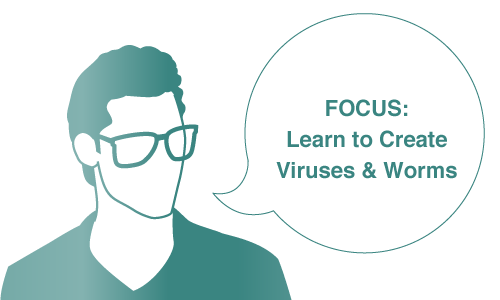 A computer virus attaches itself to a program or file enabling it to spread from one computer to another, leaving infections as it travels. The biggest danger with a worm is the capability to replicate itself on your system, so rather than your computer sending out a single worm, it could send out hundreds or thousands of copies of itself, creating a devastating effect. A blended threat is a more sophisticated attack that bundles some of the worst aspects of viruses, worms, Trojan horses and malicious code into one single threat. Blended threats can use server and Internet vulnerabilities to initiate, then transmit and also spread an attack. The attacker would normally serve to transport multiple attacks in one payload. An Attacker can also launch a Dos attack or install a backdoor and maybe even damage a local system or network systems.

Since you are an expert Ethical Hacker and Penetration Tester, the IT director will instruct you to test the network for any viruses and worms that damage or steal the organization's information. You will construct viruses and worms and try to inject them in a dummy network (virtual machine) and check whether they are detected by antivirus programs or are able to bypass the network firewall.